Home » When walls talk
Previous Next

In order to have a true impression of a place, you don’t need to mark, one by one, items in a tourist brochure, you should rather visit a marketplace, soak legs in the river, climb the tallest building, become friends with a local, see the city through the eyes of the locals.

“See the city through the eyes of the locals”, that is the slogan used by Belgrade alternative guides. It is true that a good journey is remembered not for the attractions summarized in stone, bronze or glass, but rather for unforgettable stories, those in which life comes to the forefront. For that reason, apart from classical tourist sightseeing, almost every city today also has alternative tours in its offer today. “Belgrade Alternative Guide” is an organization that has been operating for seven years already, and they take their guests for unusual walks – onto roofs, to a marketplace, to ateliers, to street galleries… The tour that we have chosen to present to you on this occasion is the street art stroll round Savamala.

Our stroll starts from Mixer because, first as a festival, then as a cultural center, it was the initiator of numerous street art activations in the quarter; it is also the starting point of our stroll since in that very place, on the facade leaning against the Mixer House, there is perhaps the most beautiful mural in Belgrade – a big blue whale, as if it is flying among the clouds on a bright day. The mural was painted by Paolo Togni and Christian Rebecchi, both from Switzerland, better-known as the Nevercrew, within the Mixer Festival in 2014. The mural belongs to a series of works known as Imitation of Life n°9. The whale is a mammal imitating a fish. It lives in a habitat where, logically speaking, it does not belong to. The same is with artists, frequently understood in a society deprived of imagination. Apart from animals, they always draw some monochrome imaginary mechanism, too, which initiates or destroys imagination. Given the fact that they painted in Belgrade, the parts of the Savamala mechanism remind us of Tesla’s coil.

Savamala waiting for the sun

We then proceed down Karadjordjeva Street towards Brankov Bridge. A few steps to the right, there are two murals – Waiting for the sun and A Fairy Amongst Water Lilies.
Waiting for the sun is yet another effort made by the Mixer Festival to give back the old sparkle and shine to once the most beautiful city quarter. Inspired by a matchbox on which there was an advertisement for the movie “Promised Land” dating back in 1961, a New York designer, Aleksandar Maćašev, made a print that was then painted on the façade of the building at 53 Karadjordjeva Street by local painters Marija and Stevan Šoln. The most interesting detail in the mural is the window imitating an eye, whose reflection reveals Brankov Bridge.
Right next to that mural, there is a mural painted by one of the first and most famous Belgrade street artists – TKV. She made her first stencil when she was only sixteen years of age. It was a simple single-layer template of Amélie Poulain. Today, her stencils have transformed into serious big-size murals.
As soon as we cross the street, at 40 Karadjordjeva Street, the Endangered Ghost Panda is living there. Paunchy and sad, with a heart-shaped flower and an empty frame, the panda is waiting for a picture to put in, just like Savamala waiting for the sun. The panda is endangered as the whole this area, but at the same time it is courageous because he speaks for those who have become voiceless and hopeless. The Panda, having originated from Barbara Dimić’s and Tijana Tripković’s imagination, is one of the numerous ghosts symbolizing Savamala, its charms and its problems as well. 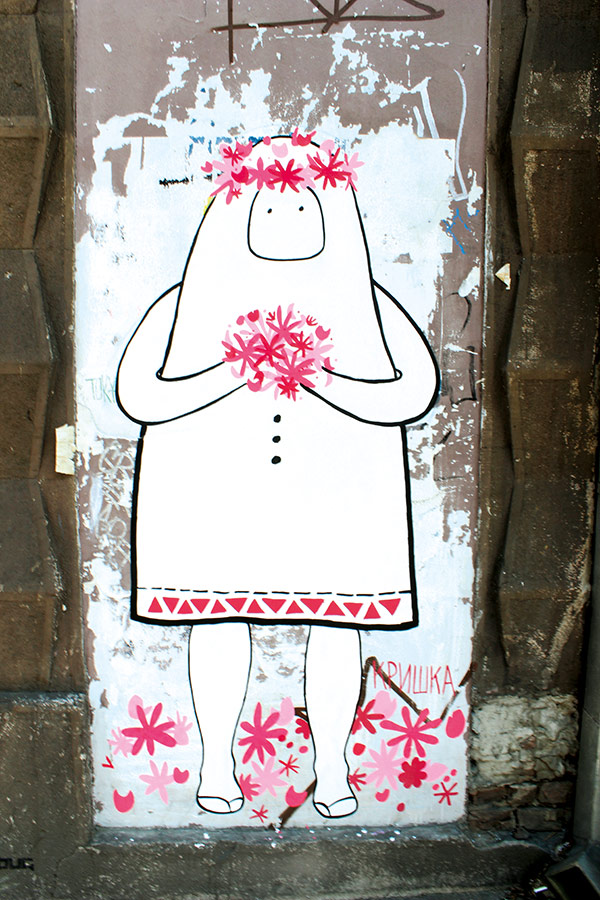 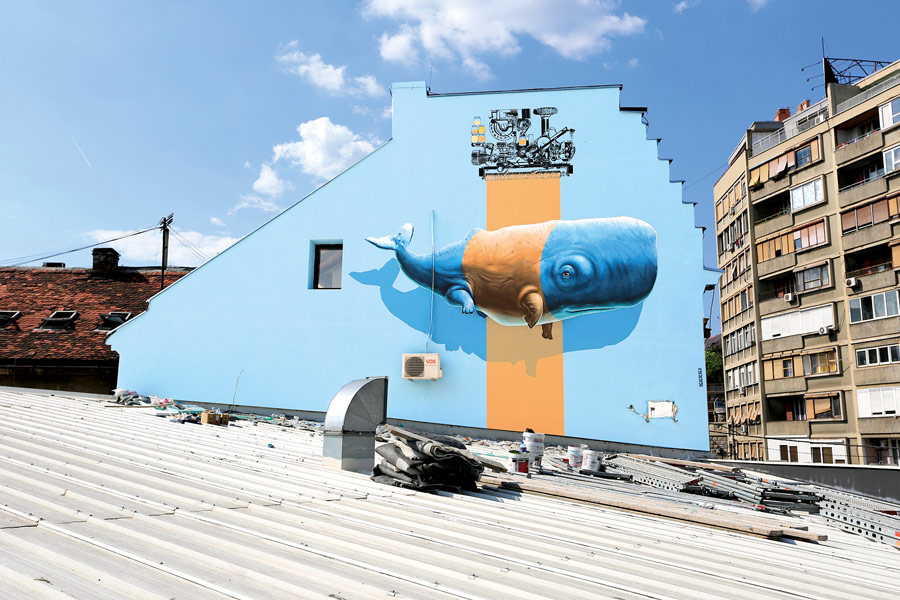 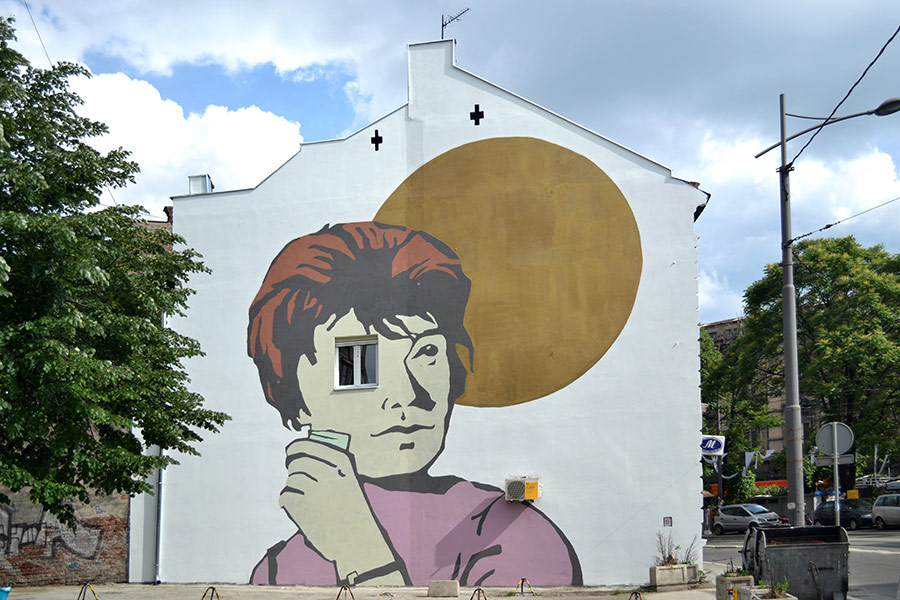 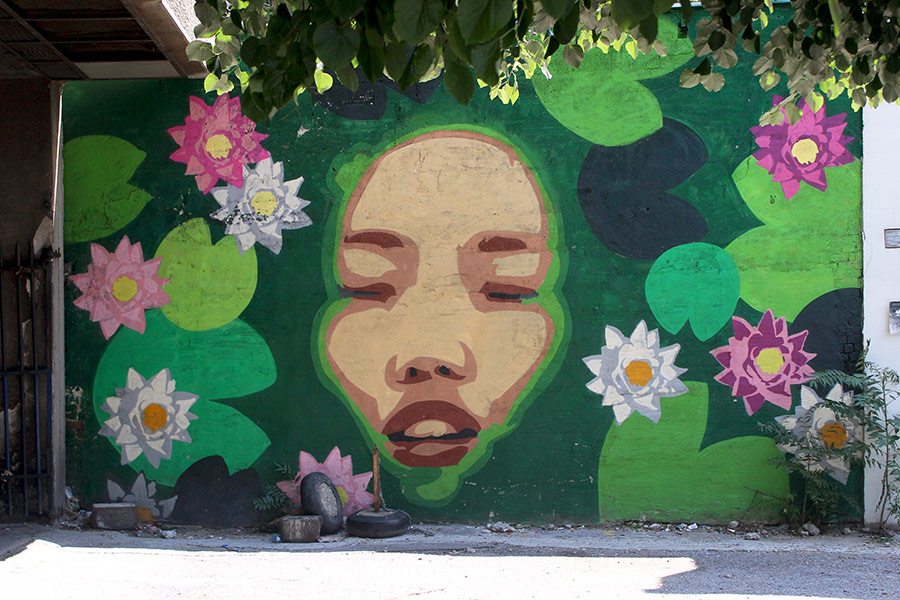 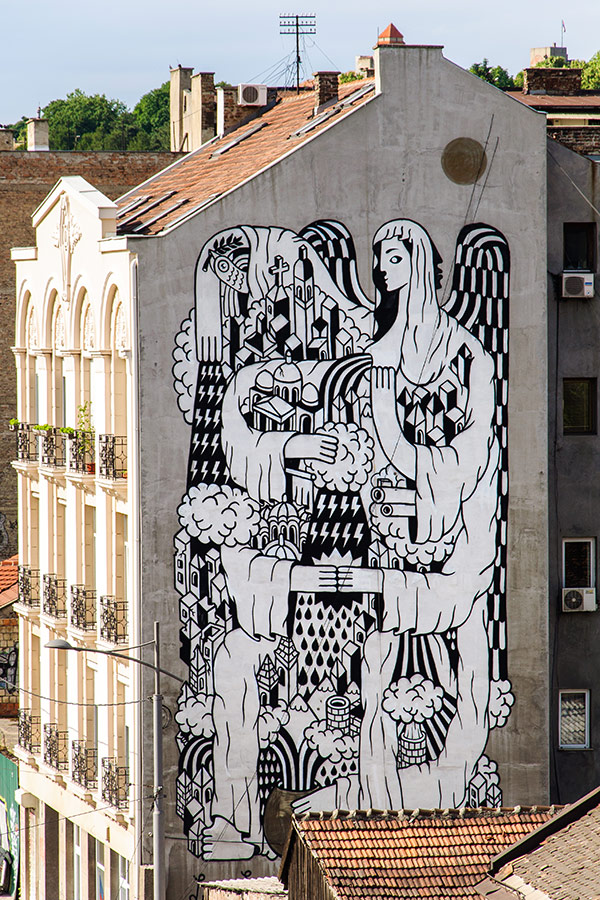 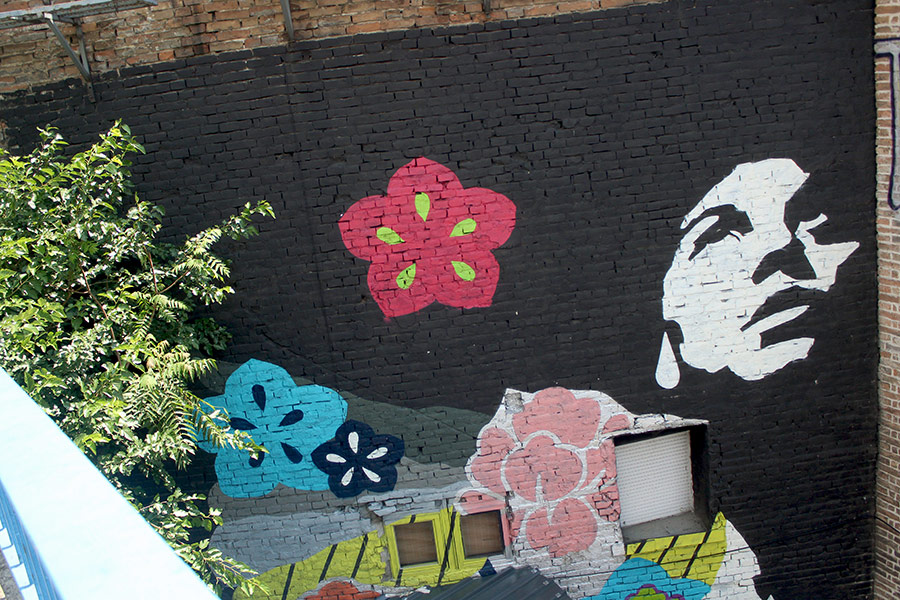 The mural as the awakener of consciousness

Once we pass under the Brankov Bridge and proceed towards the Belgrade Fortress, we cannot not see the twenty-meter high and eight-meter wide mural of La Santa de Beograd at one moment. Since 2008, BELEF has been bringing the imposing names of the world street art to Belgrade, with the idea of having them leave their own interpretation of the city on its façades. A French artist, Guillaume Alby, better-known as Remed, is one of them. Given the fact that he had never been to Belgrade before, he had first studied the history of the city and Serbian art. He was particularly attracted to medieval frescoes and the icon of The Three Handed Virgin. So, he decided to give as a gift to Belgrade the patroness, whose numerous arms both destroy and protect the city, naming the mural La Santa de Beograd.
Not far away from that place, there is yet another mural, painted during BELEF. It was painted by BLU, an Italian artist, who hides his identity under that pseudonym, giving priority to art, rather than the artist, in that way. All his drawings are similar to each other since they are all colored with the same criticism of consumer society. They only differ from one another in the form, since they follow the architecture of the building, highlighting in that way the uniqueness of every place. The mural in Pop Lukina Street represents a negative impact of mankind on the natural environment – that is a big face of a human, who instead of the teeth has buildings and is preparing to throw a tree, the only colored detail in the black-and-white picture, into his scary jaw.
Opposite Blu’s mural, there is a production called A New Way – A New Life, made in 2003. That is the first mural to have been made through the joint effort of several artists, each one of them having contributed to it with his/her own style, simultaneously developing a unique story. They painted the world from its beginnings to man’s conquering space, but for the most part they turned to the negative consequences of hurried progress – lies, wars, crime etc.

In order to close the circle, we walk down the stairs, descending from Brankov Bridge, heading back to Savamala. We pass by a production of a more recent date, made within the Cons project, whose authors are young artists Artez, Wuper and Resto. There is a wall portrait of Robin Williams, painted in the night when the actor died. Although the author decided to remain anonymous, the mural appeared on all world portals.
Apart from many other artistic interventions, there is homage to yet another great actor on the façade of the Cultural Center Grad. An artist from Zagreb, Boris Bare, the founder of the Pimp my Pump street art society, painted the portrait of a legendary actor Bata Stojković last summer, because he adores the movie “A Balkan Spy”. The mural attracted great attention of Belgrade inhabitants, and the comments below the painting that the “Grad” has shared on its Facebook page are positive from the first to the last one. They are also a little bit nostalgic. It is so because, having played those roles, Bata Stojković marked the childhood of numerous generations, while the sentences he said in his movies are also quoted today. For the purpose of this story, the one that may seem to be the most appropriate is: “Paint Belgrade!”.