The Capital of Wine Serbia

Home » The Capital of Wine Serbia
Previous Next

The Capital of Wine Serbia

It is not only that the oldest written document about the winegrowing Župa originates from the end of the 12th century, but the only museum in the country thematically dedicated to winemaking and winegrowing of both the region itself and of Serbia as a whole is located in Aleksandrovac – the center of the Župa area today. All those who love wine and respect the art of making it are advised to become familiar with this beautiful “muse” of wine tradition and culture.

Today, a museum setting which represents a centuries-old tradition of growing vineyards and grape processing in Župa is located in the edifice of the of the Wine and Fruit Growing School, whose construction began exactly one hundred years ago. A special place in the setting is occupied by a pleiad of scientists whose innovations have improved winemaking in Serbia. “The photographs you can see are the portraits of famous scientists who mainly graduated from our School of Agriculture. Among others, I’d like to give prominence to Vukašin Tošić, one of the first professors at the Belgrade Faculty of Agriculture, then Dragoslav Milosavljević, the creator of the three new varieties of grapes – Neoplanta, Syrmium, and Župljanka, as well as Lazar Avramrov, the man who grew over twenty new varieties of grapes, who the winegrowing of the whole of our country owes a favor,” enthusiastically tells us Djordje Živadinović, the curator of the Museum and a BSc in agricultural engineering since recently.

Through the space of the famous and the deserving, we step into a picturesque room – the reconstruction of the interior of the winegrowing houses that used to be called spacious fields (poljane) of the region. “In the 17th and the 18th centuries, seasonal settlements were beginning to emerge in vineyards since their owners mainly lived in remote mountain villages. In these seventy or so houses, they only stayed while performing some more demanding works, whereas, on the other hand, they were only constantly lived in by field-guards – the men protecting the vineyards. Otherwise, the owners of vineyards were rich people, mainly cattle traders. The houses had two floors with two rooms each. On the ground floor, there was a brandy still (kazanica) for making brandy and a room for preserving wines and brandies. On the upper floor, there were a “chimney” room – a kitchen with a hearth and a room for reset and sleeping,” Djordje Živadinović describes the attractions of the Field Palaces. He drew our attention by making a mention of a few rarities – the wooden “krblas”, the vehicles similar to big cones serving to transport grapes and wineskins, an old accordion testifying to the joyful moments of winegrowers’ lives and an original cooper’s workshop with complete tools. Zoran Blagojević Žeka is the author of the setting and the man who literally stole from oblivion the deserted and mainly dilapidated field palaces. 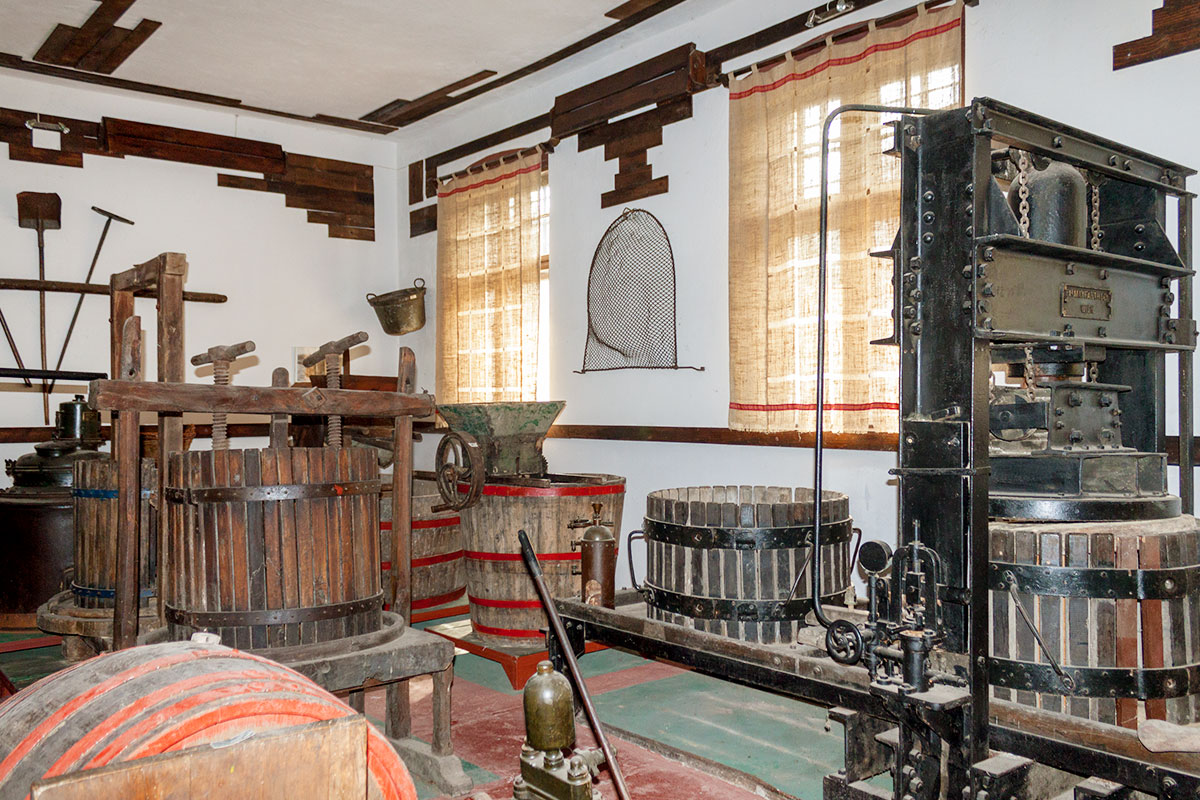 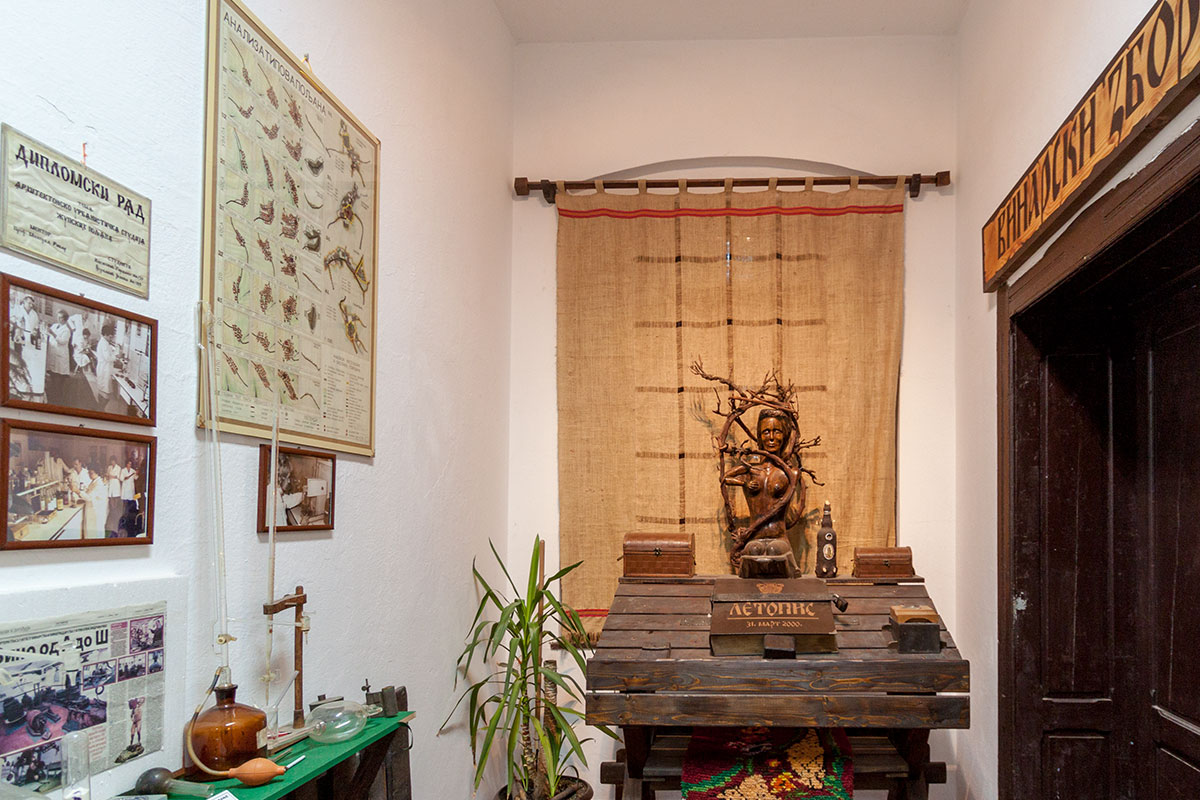 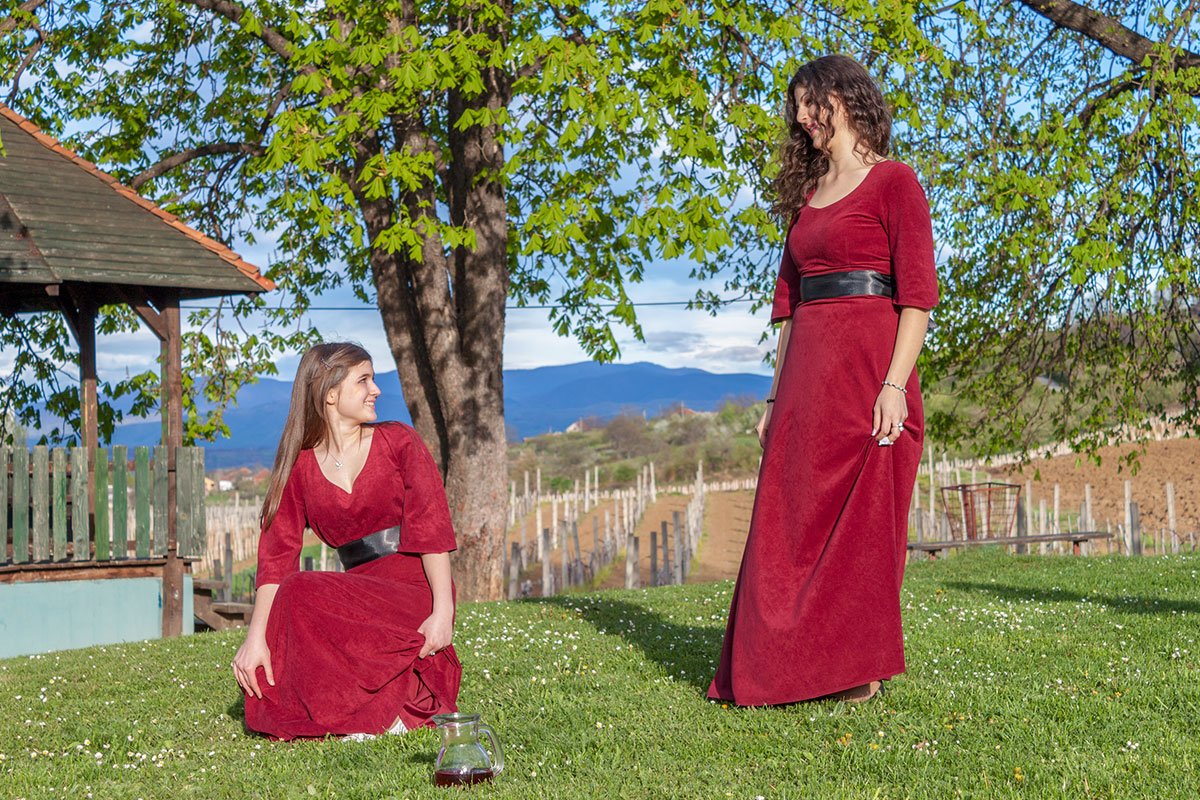 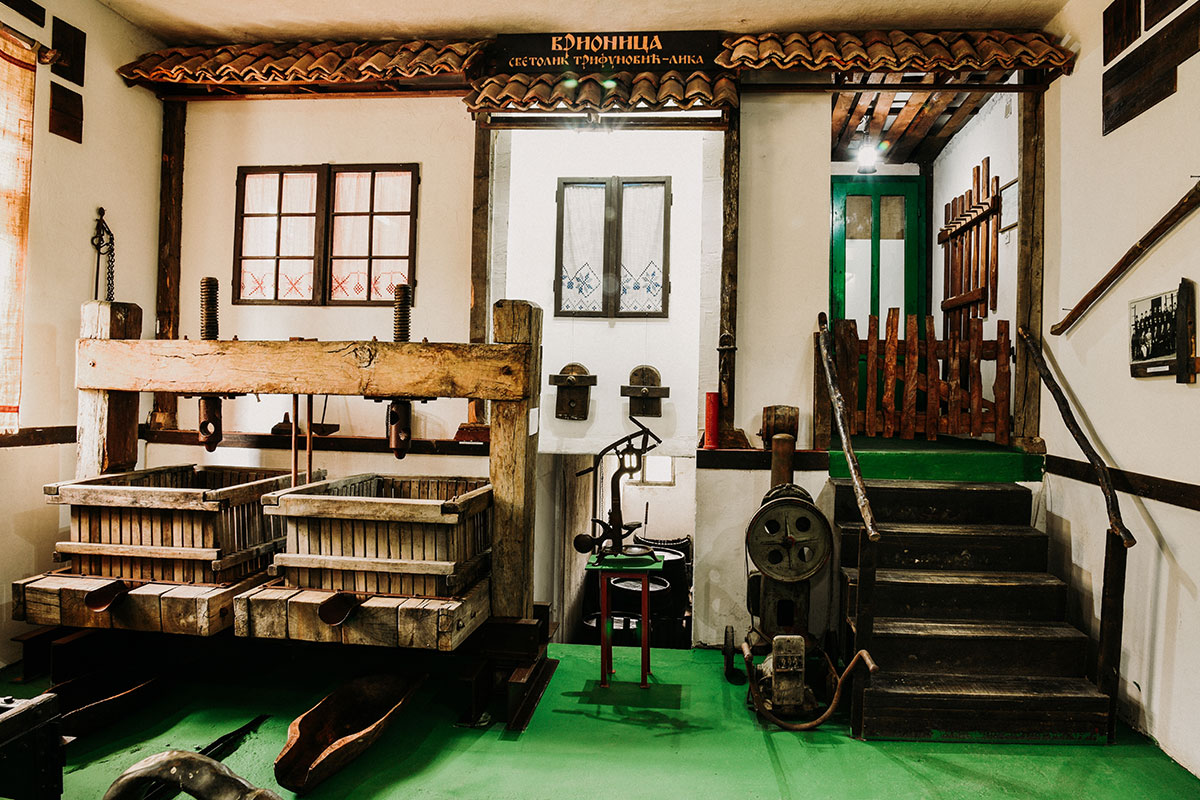 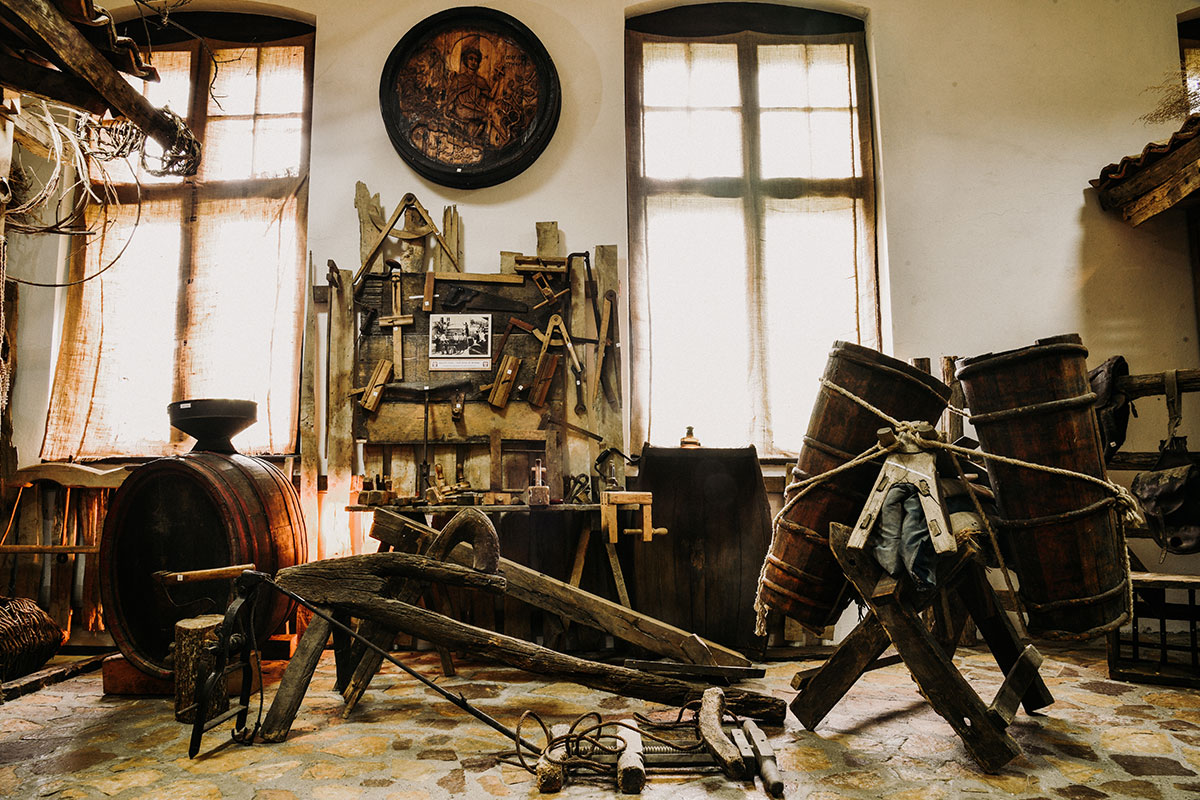 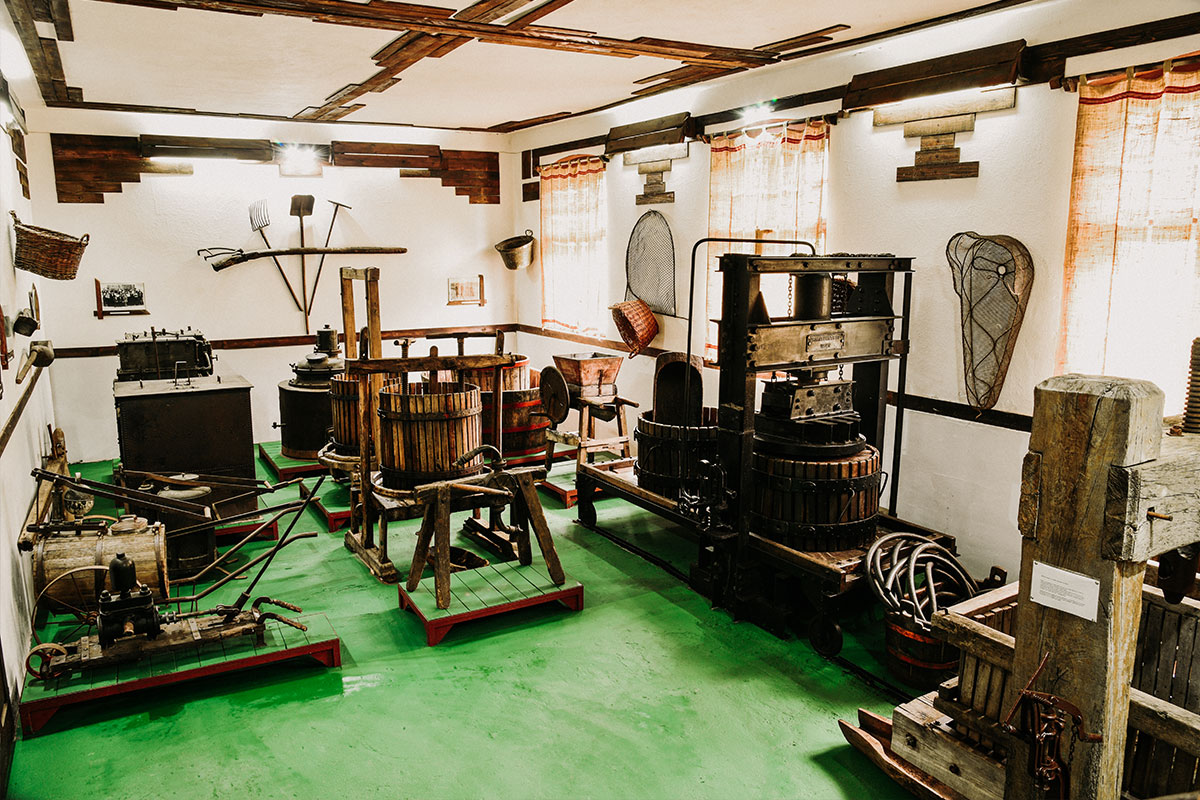 Museum in the Vineyard

Of about seventy fields, there are hardly ten or so left today. In the village of Lukarevina, there are a few original houses and there are plans to form a museum in the open air in them in the future.

The first mention of Župa is found in the Studenica Charter of 1196. In the restitution process during the post-socialism epoch, the land was returned to the Monastery, the vineyards were renewed, and the first series of wine has been produced there this year.

There is a room with the exhibited different wine processing devices seemingly obsolete today, which used to be the peak of technological development in their time. Of the exhibits, the hydraulic press machine received from Austria-Hungary as a part of war damage is particularly attractive. The wine cisterns coated from top to bottom with the glass designed by Bordeaux enologists were also the ultimate state-of-the-art technology. The curiosity of this part of the setting is also the press of Sremski Karlovci made from the mulberry tree, as well as the vineyard protection sprayer as the herald of today’s atomizers. Amongst the rarities, there are also the “instruments” of the first enological laboratory for the examination of the quality of wine established by Bogdan Mirić – the author of the famous Župa rosé wine. There is but one also exceptionally interesting exhibit not found in this space but placed in the Museum’s yard due to its size. It is a giant anti-hail gun, which used to be charged with powder and stones, as the curator explained to us.

Apart from the “Winegrowing-Wine Saints Room” that serves to host all kinds of gatherings, celebrations and lectures, there is the “Hall of Winemakers”, in which the setting is incessantly changing. About twenty of the seventy or so wineries of the Župa region have the exhibition spaces of their own. In the center, there is the sacrosanct wine house Župa Wine, the major and the most famous wine producer of this region. Inside its production plants, there is the biggest wine-storing vessel in the Balkans – a 5-million-300-thousand-liter cask. Our attraction was also drawn by the “Župa vine plant temple” – the oldest vine found in one vineyard in Drenča, as well as the sculpture dedicated to the Župa winegrower modelled in the chestnut tree.

From a Procurement Clerk to an Academic

The name of one pupil is also found amongst the distinguished teachers’ names, namely the name of Dobrica Ćosić, a fruitful writer, who went into the world with a diploma of a procurement clerk and trod his path from a partisan commander, via a dissident, all the way to the status of an academic and a president of the state. 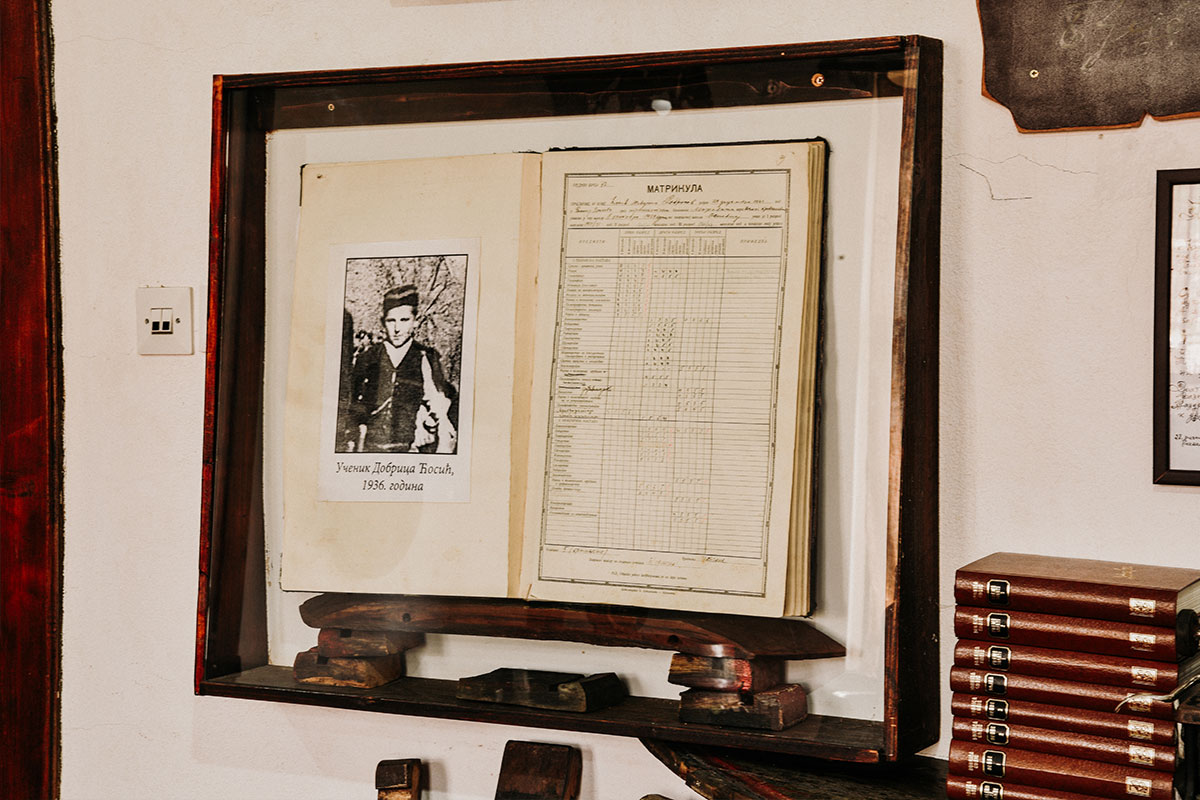 Our conversation with the curator ends in the pleasant ambience of the museum’s yard, in a haybarn next to the school vineyards. The sight is made more beautiful by the well-groomed nurseries of the school vineyard where about fifty different grape varieties are grown. The story telling about how this school experimental estate was constructed is also interesting by itself: all began somewhere around the end of the 19th century, after the phylloxera epidemic that had also devastated the winegrowing hills of Župa. The decree of Milan Obrenović ordered that fruit-vine nurseries should be formed, with the task to quickly recover winegrowing. So, new vineyards were also raised here on the fifty hectares of the state-owned soil, namely the soil where the Museum is located now, and the soil used by today’s School of Agriculture for performing the visualized teaching process. Brining his story inwrought with emotions to an end, Djordje Živadinović cites the words of a legendary local teacher, Svetolik Lika Trifunović, who used to tell his pupils that the world was set in motion by the three liquids: cars and planes by oil, hydropower plants by water and humans by wine.