Through landscapes of Užice

Užice is the central town of South-East Serbia. In an old poem, the town is praised as “Small Constantinople”, and in the more recent history, it became famous for being the leading town in demonstrating anti-fascist resistance. In 1941, the Republic of Užice was the only free territory in occupied Europe. Today, Užice is known for being the heartland of one of the most beautiful mountain regions of ours. With the National Park of Tara, Mokra Gora (Wet Mount), the Šargan Eight museum railway and stratified urban heritage, travelling through the landscapes of Užice will offer you a series of impressive and diverse adventures.

Archibald Paton, an English travel writer, noted down a tradition saying that, late in the 18th century, Užice was a merchant town with an incredible population of 60,000 inhabitants. The seething town of that time is also spoken about in the verses of a folk love poem “Hey, Užice, Small Constantinople”. Apart from an image of a “beehive of people” that had made the poet compare Užice with the legendary city on the Bosphorus, Užice also has its unique hilly landscape in common with “big” Constantinople. The town is literally “stacked up” on the steep hills. The traces of the Ottoman Empire are hardly visible today. The transformation of Užice from a “seher” to a Serbian small town is visible in an interesting museum setting of the House of the Jokanović Family – one of rare preserved edifices in the Balkan-Oriental style.

A Fortress hugged by clouds

Užice is a town that has existed for a long time now, having appeared in the written sources for the first time in the 14th century. The fort of “Old Town”, erected on a cliff perpendicularly coming down to the river banks of the Djetinja, stands for a symbol of the mediaeval history of the town. Don’t miss an opportunity to have a view of this striking edifice with “the head high up in the clouds and the legs in the whirls of the Djetinja river”. This impetuous mountain river flows through the contemporary town and is its symbol. One can see the river from near while walking down one of the most beautifully arranged swimming resorts in Serbia, where the town’s tourist attraction – the first hydropower plant in Europe, designed according to Tesla’s revolutionary principles – is also located.

The voice of Radio Moscow and Radio London

In the year of hardships 1941, with Hitler having already crushed the whole of continental Europe, there was a public address system reverberating from Užice’s central square, broadcasting the news of Radio Moscow and Radio London. For more than two months, Užice was the central town of the large freed territory, which, due to incessant combats, constantly shifted its borders. The town was an isolated island of freedom, where the future socialist Yugoslavia was being born. You can become more closely acquainted with the famous days of the Republic of Užice at the themed exhibition of the National Museum, which is located in the building in which the supreme headquarters headed by Marshal Tito stayed. The grandiose memorial compound on Kadinjača testifies to the heroic end of the Republic of Užice and the resistance of the Workers’ Battalion of Užice in a Spartan manner, who sacrificed themselves while protecting the withdrawal of the main body of the army. 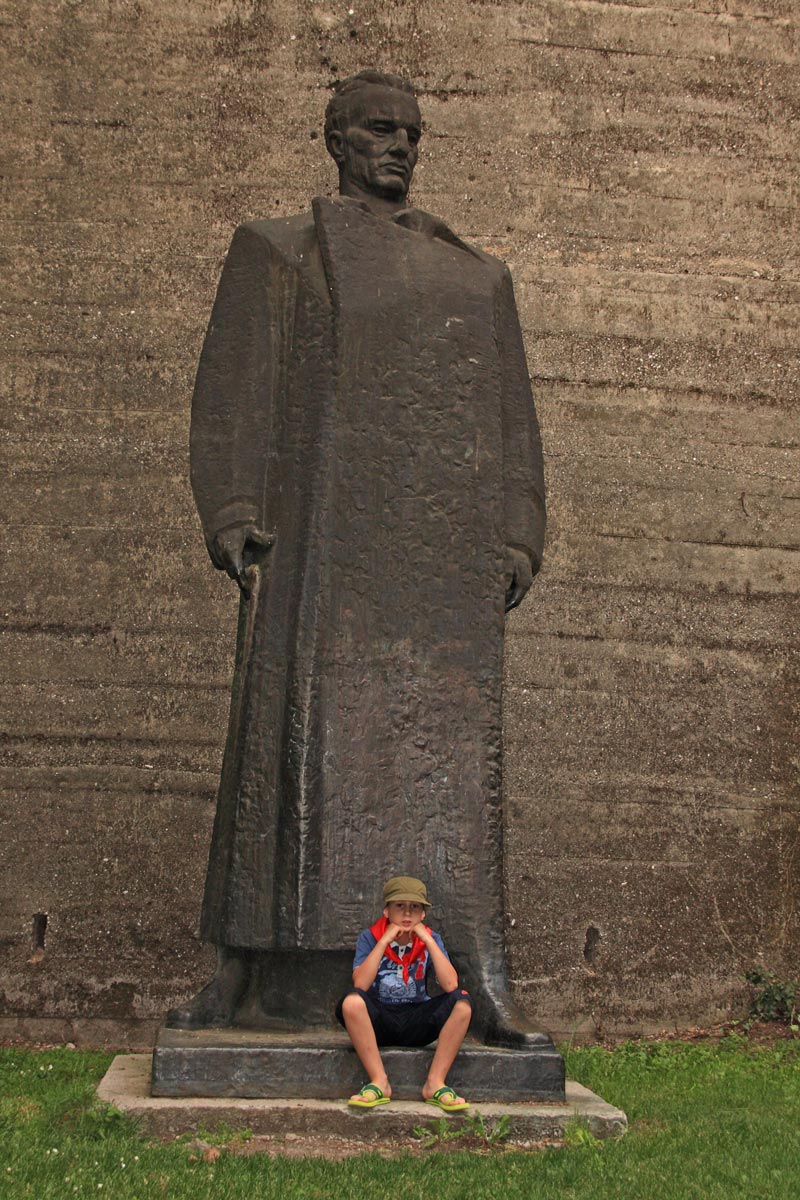 The urbanistic miracle of Partisans’ Square

Due to its war merits, Užice had the status of the favorite town after liberation. It changed its name into Titovo Užice, and became one of the centers where modern urbanistic ideas came true. The building of Partisans’ Square, which even today is considered as a unique architectural reach of the epoch, was the major project. Paved with white and black marble, surrounded by public and residential buildings, the square covered around twenty thousand square meters. The opening festival held in 1961, at which Tito was the guest of honor, was visited by more than 200,000 people; chronicles record that 265 flags of foreign countries were flying throughout the town, posted on masts in the honor of the present diplomats. The square was dominated by the grandiose monument of Tito, which, in spite of the resistance of the people of Užice, was relocated to the courtyard of the National Museum. Don’t miss an opportunity to take a photo at the distinguished Square and see the biggest monument of the legendary president of Yugoslavia.

Užice is a mountain metropolis of its own kind. In the vicinity of the town, there are rare gifts of nature: the slopes of the Plateau of Zlatibor, Tara Mount and the national park of the same name, with its infinite forests, preserved eco-systems and belvederes with a view of the magnificent canyon of the Drina river. The most famous tourist center of Tara is located in Kaludjerske bare (The Monks’ Ponds), where there are numerous hotels and houses for rest at your disposal. The “Omorika” Hotel has the biggest capacity; its attractions make it look like a small tourist town. Apart from going for long walks down signposted paths and swimming in the swimming-pool, you can recreationally ski in the nearby mini ski resort.  Mokra Gora (Wet Mount), which has gained its worldwide reputation thanks to the “Šargan Eight” – the unique museum-tourist railway, and the fairytale ethno-village of “Drvengrad” (Timber Town) of our famous editor Emir Kusturica, reclines against Tara. Known artists and world stars you can see here – especially during the film festival of “Kustendorf”, are frequent visitors of Kusturica’s “magical hill”.

People of Užice are known for their sharp spirit and their special “Era-style” humor, which, as it is believed, originates from their old homeland of Herzegovina, where they came as immigrants from. Here, spending your time face to face with the people, you will experience their exceptional openness, eagerness and proneness to making jokes. During your stay, you will have an opportunity to gain special gastronomical experiences. In addition to the smoked ham, you should certainly taste the specialty called “komplet lepinja” (a flat bun with everything in it) or, while sipping twice distilled plum-brandy, have a nibble of corn bread served together with the finest mountain cheeses.

Photo: TO of Užice