Inheritor and nursery of knowledge

Home » Inheritor and nursery of knowledge
Previous Next

Inheritor and nursery of knowledge

Wines and brandies of bukovo monastery

Wine symbolizes the blood of Christ. Orthodox Christians receive bread and wine as the Eucharist. That is why almost all Serbian monasteries have been making wine “from times immemorial”; Bukovo Monastery, however, has a special, prominent place in that tradition. Exactly 134 years ago, the first winegrowing school in Serbia was established in this monastery. Even today, Bukovo is a nursery of the knowledge of “wine”, and the monastery’s wines have repeatedly been successful in world competitions. The latest news says that they won one silver and two bronze medals at the prestigious Decanter World Wine Awards 2021.

Bukovo is located in the Border Land of Negotin, one of well-known winegrowing regions in the east of Serbia. The mountains Miroč, Deli Jovan and Crni Vrh (Black Summit), on the one side, and the rivers Danube and Timok, on the other, gifted this region a suitable climate. The culture of growing grapevines is believed to have been brought to this region by ancient Romans, although there are those who think that grapevine had also been growin in the prehistoric epoch of Vinča Culture. In a more recent history, numerous documents testify to the fact that wine used to be exported from the Border Land of Negotin to European spaces. Winegrowing in the Border Land experienced its greatest rise in the mid- and at the end of the 19th century when, due to the phylloxera disease that had destroyed the majority of their vineyards, European countries (primarily France, Russia and Germany), imported the wine made in this region through the Port of Radujevac, and Austria-Hungary even had its consulate in 1911, via which it traded with this precious and deficient beverage. 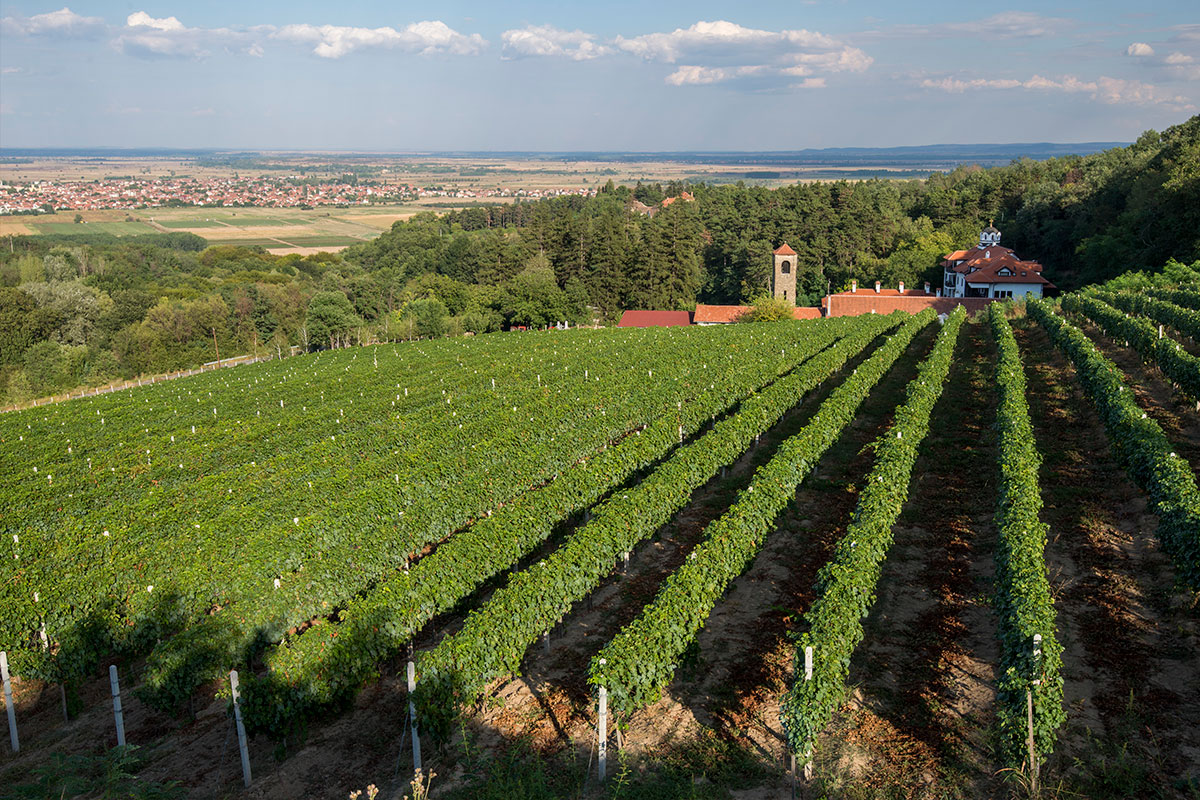 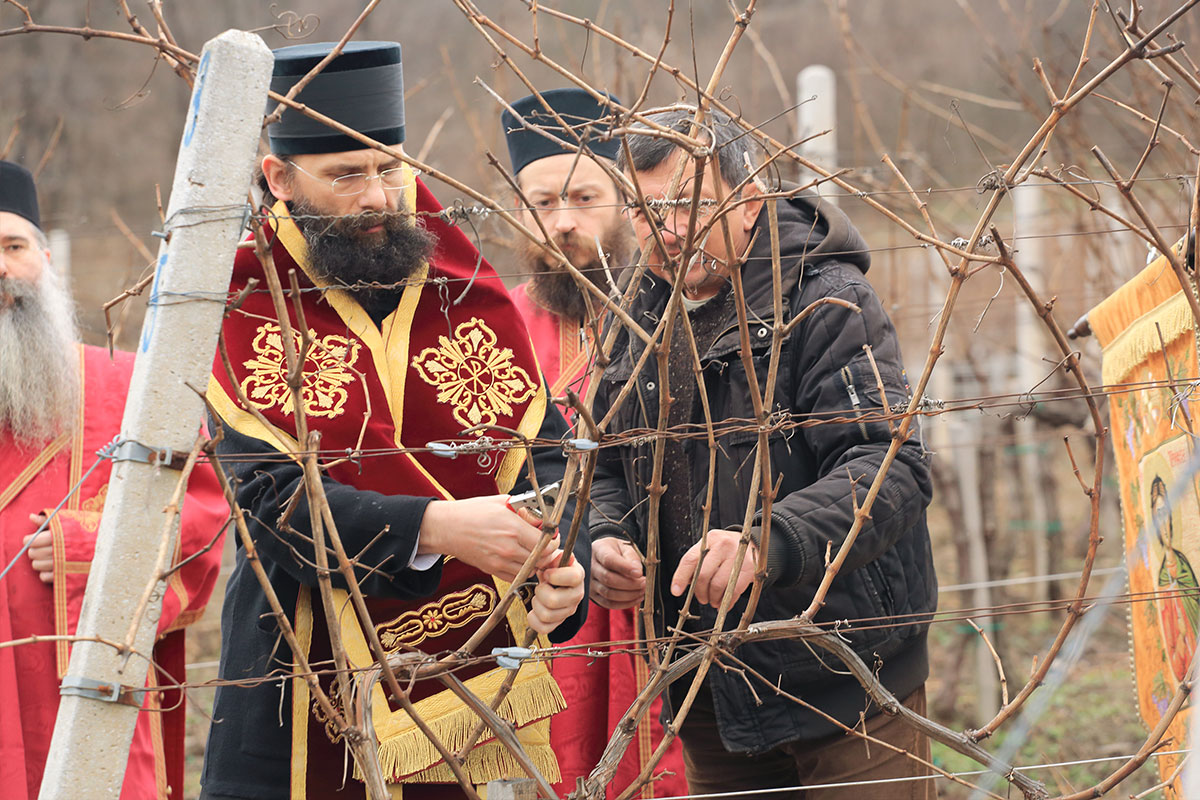 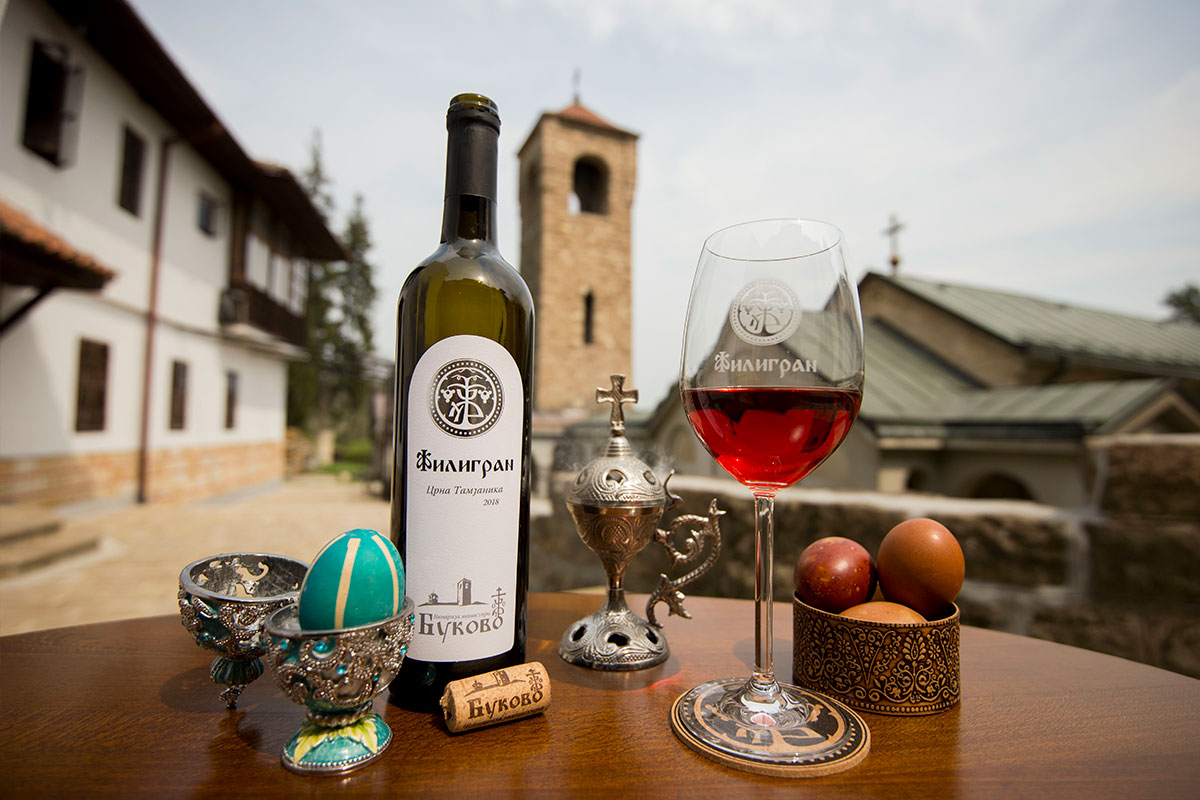 When a visitor comes to the monastery of Bukovo, he will be amazed at a church from the 13th century – most probably the Serbian King Milutin’s legacy, a well-groomed monastery complex, as well as a rich material and spiritual legacy.  Given the fact, however, that our topic has to do with “wine and brandy routes”, we are going to present more closely the monastery’s estate, which includes vineyards, a plant for making wine and brandies, as well as a brilliantly equipped and designed shop selling the monastery’s products. The renewal of the tradition was started by the present Bishop of Timok, Ilarion, as early as in his monastic days, then also the hegoumenos of the Monastery of Bukovo. In agreement with the sodality, he decided to start new plantations. In the beginning, there was only one vineyard; now, spacious grapevine plantations situated on the hills of the monasterial complex repeatedly catch the viewer’s eye. Contemporary grape varieties are grown with great dedication and knowledgeably. The monastery’s sodality are specially proud of the renewed plantations of the autochthonous variety Black Tamjanika, which they literally saved from eradication. It is interesting that, for this endeavor, they engaged a young PhD in enology, Radovan Đorđević, who, together with the sodality, vigilantly supervised the growing of the vineyard and later the process of producing the wine of a markedly delicate taste and scent. Together with the wine producers of the neighborhood, they again used their knowledge and dedicately made the Wine Hills of Negotin famous throughout Serbia, the Balkans and Europe itself. Apart from the Tamjanika, the old variety Prokupac and the modern varieties Cabernet, Burgundy, Merlot, Gamay, Sauvignon, Chardonnay and Riesling as well.

The endeavor made by the sodality of the Monastery of Bukovo is worthy of praising – in quite an unusual way, the monks succeeded in reaching a harmony with and uniting into one their prayer life with the highly set standards in the technology, packaging, sale and promotion of their products – first of all wine and brandy. The wide spectrum of their products highlights Filigree Black Tamjanika – a unique wine in the Serbian market produced from 100% Black Tamjanika grapes. It is characterized by a very constant intensive muscat aroma with the scent of field flowers, roses and basil. Double-distilled Black Tamjanika grapes are also used to make Lozovača (a grape brandy). Of the products, worth mentioning are also Cabernet Sauvignon, which was awarded a high acknowledgment at the DWWA World Competition in 2017, and Bukovo Plum Brandy, which is produced from the autochthonous brandy varieties of the plum: crvena ranka and požegača, following exactly the traditional production procedure that implies double distillation in the Serbian brandy still. The fragrance complex of the plum preserved and converted into Bukovo Plum Brandy has discretely been enriched with the aromas of the Serbian oak-tree in which this brandy ages a few years. We should not forget that the small shop also sells excellent homemade honey and medicinal herb teas. Vigilant supervision and the application of contemporary “tools” is also visible on the monastery’s web presentation: Winery – Monastery Bukovo.

The nearby villages of Rajac, Smedovac and Rogljevo are also famous for a rich wine history. These cellars’ urban and architectural solutions preserve the spirit of vernacular architecture. They are dug in in the earth, built of stone and trimmed tree, and covered with Spanish tiles. They provide ideal conditions for taking care of wine, and they are organized around the central square with a fountain in the middle. 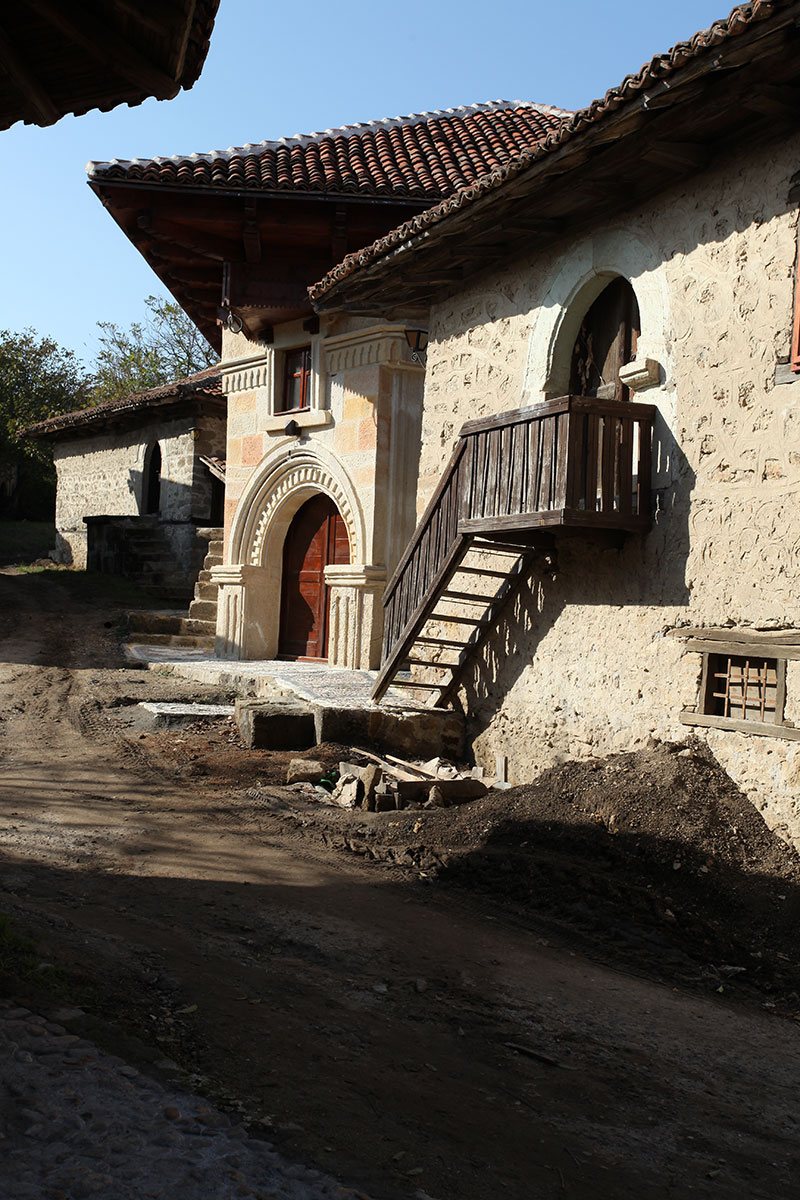 A long history of world acknowledgements

Wine producers of the Border Land of Negotin also took part at the 1907 London Wine Exhibition. Three diplomas also testify to the quality wines of this region. The winegrowers from the village of Rajac, Živko Prvulović and Milovan Ilić, were awarded two bronze medals for the quality of the wine. Ljubomir Ilić from Negotin was awarded a gold medal. 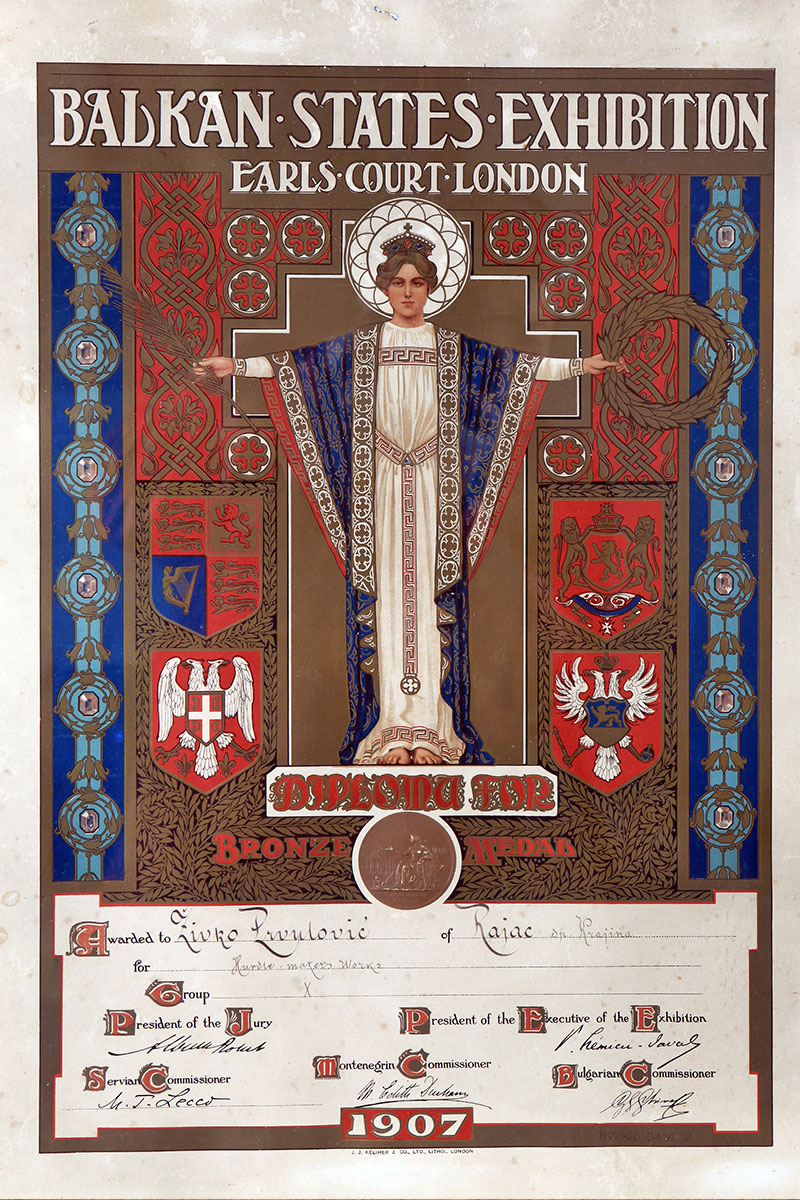