The most luxury hotel in Petrovac

The Riviera Montenegro Hotel has become richer for a new luxury edifice in its spacious complex. Right at the seashore the new Crystal Riviera Hotel, whose architectural glamor and beauty surpass all the construction endeavors in this part of the Adriatic has been erected recently.
Many people know that Petrovac at the shore was discovered as a tourism destination as early as in the 1930s. You get to know the long history of Petrovac through the town’s many sights. On the northern side of the town, ancient, stone towers rise, whereas on the other, southern side, the new, elegant Crystal Hotel of an imposing size has anchored in the ambience of a small peaceful peninsula, with luxuriant vegetation, tranquility and freshness. You can’t tell whether it is the Sun and the sea casting reflection upon the Crystal Hotel or the Crystal mirrors while its glass glow on the surface of the sea. Anyway, the owners did not skimp on the beauty of the edifice and great attention was paid to the interior and exterior of the hotel.
Foreign guests have been coming in the largest number to this complex for a long time now – so, the new hotel, which was built observing the highest standards, will satisfy even those pickiest. The small, fishermen’s place has been a hit fashionable summer resort reminding of the French coast. The circular terraces with a lot of greenery look like an image of a shell just taken out of the sea. 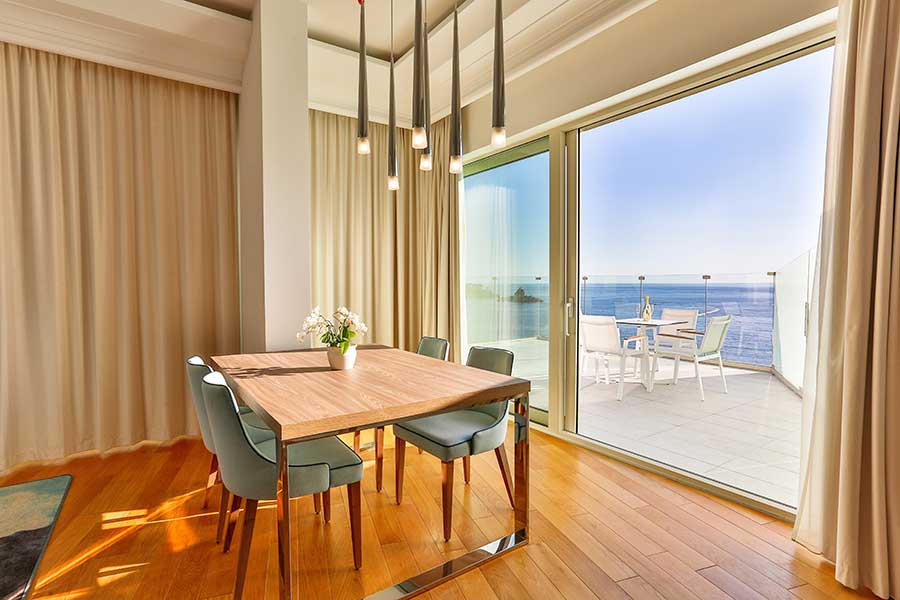 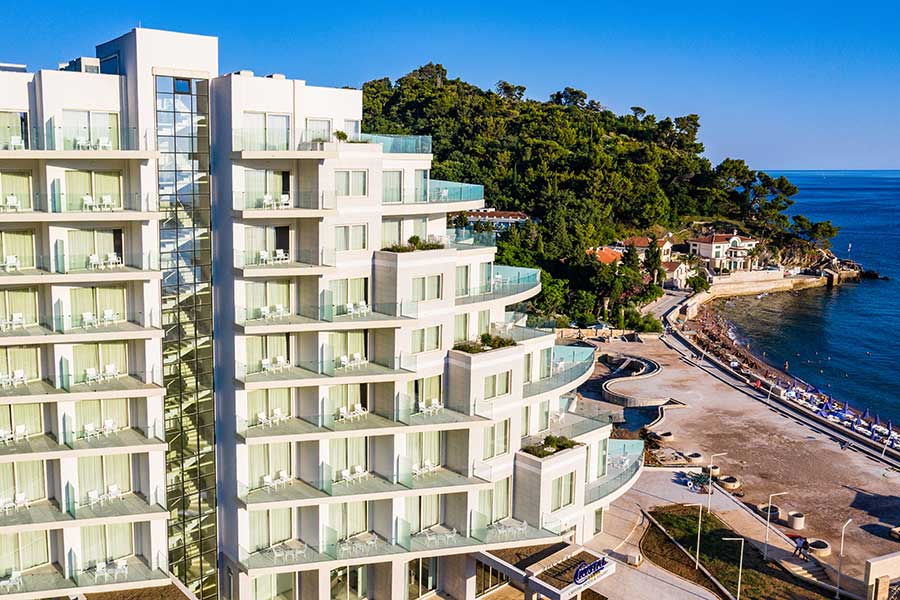 Reddish sand prevails on the Petrovac town beach, whose beauty is particularly emphasized by the view of the small islands of Katič and Sveta Neđelja (The Holy Sunday). On the Holy Sunday, there is a small church which, according to a legend, was erected by a seafarer who had found salvation there after a shipwreck.

The Lučice Beach of utmost beauty is located in the vicinity of the Crystal in an about-ten-minutes’ leisurely walk. It is situated in-between two reeves, surrounded by a cypress and pine tree forest, and its fine, tiny sand is of a golden-yellow color. The immediate hinterland of the beach is unbuilt, which gives it a special beauty. It is reputed as one of the most beautiful throughout the Montenegrin coast.

The Hotel has an outdoor swimming-pool for children and adults, an indoor swimming-pool and a spa center with a hammam, a Russian spa, two Finnish saunas, two steam baths, a private zone with a hydro-air swimming-pool, a shower and tepidarium zone, as well as rooms for the body and foot massage.