A story about harmony and turns of fate

Home » A story about harmony and turns of fate
Previous Next

A story about harmony and turns of fate

An Album of Memories – Splendid Hotel

In the immediate vicinity of the Assembly of the City of Belgrade, the building at no. 5, built in 1923 – the former Splendid Hotel, awaiting its reopening, will attract your attention. This four-floor edifice with a mansard was built by famous Belgrade tailors and partners – Života Lazarević and Trifun Jovanović, who had used their life savings for that purpose.

Before he dedicated himself to hotel management, after having mastered the craft of tailoring in Berlin, Trifun, who was born in , came to Belgrade, where, together with his partner Života, he opened a registered tailor’s shop in Knez Mihailova Street. Života, who was born in Paraćin, had mastered the craft of a women’s tailor in Paris and gained great experience while working in Germany, Paris and St. Petersburg. These two first-class tailors also successfully developed their business by trading quality cloths they were importing from England. Their partnership was impeccable, and the profit they earned they invested in new business and immovable estates. On the eve of the First World War in 1913, they bought the land in the elite place, on which they would build a hotel immediately across the King’s Court, in the then Dvorska Street, ten years later.

The splandor of the Splendid

The Splendin used to be a comfortable bed-and-breakfast hotel, at which mainly businesspeople from the countryside stayed. As descendants remember, the interior of the hotel was arranged elegantly and in a modern way: a massive double door introduced one into a spacious hall dominated by a reception desk. In one corner, there was a telephone booth. The space was graced by a crystal mirror made by the famous “Bradić and Antonović” firm, a porcelain chandelier, an elegant wooden table and a few comfortable armchairs. The pleasant atmosphere was made complete by the even ticking of a big wall clock. In the middle of the breakfast hall, there was a decorative detail – an imitation of a built-in fireplace, above which two artistic paintings by an unknown Dutch master hung. At the bottom of the hall, there was a spacious elevator with mirrors and a padded seat. The marble staircase with the banister and the fence made of wrought iron was leading to the upper floors. The staircase and the corridors on the floors were covered with laufteppics, and the walls were decorated with large-size mirrors and wall chandeliers. On the example of French standards, this hotel with its 40 rooms with a “wash-stands“ had a common bathroom on each floor. In the attic, there was a kitchen and a storage space, as well as rooms for the accommodation of the hotel staff. 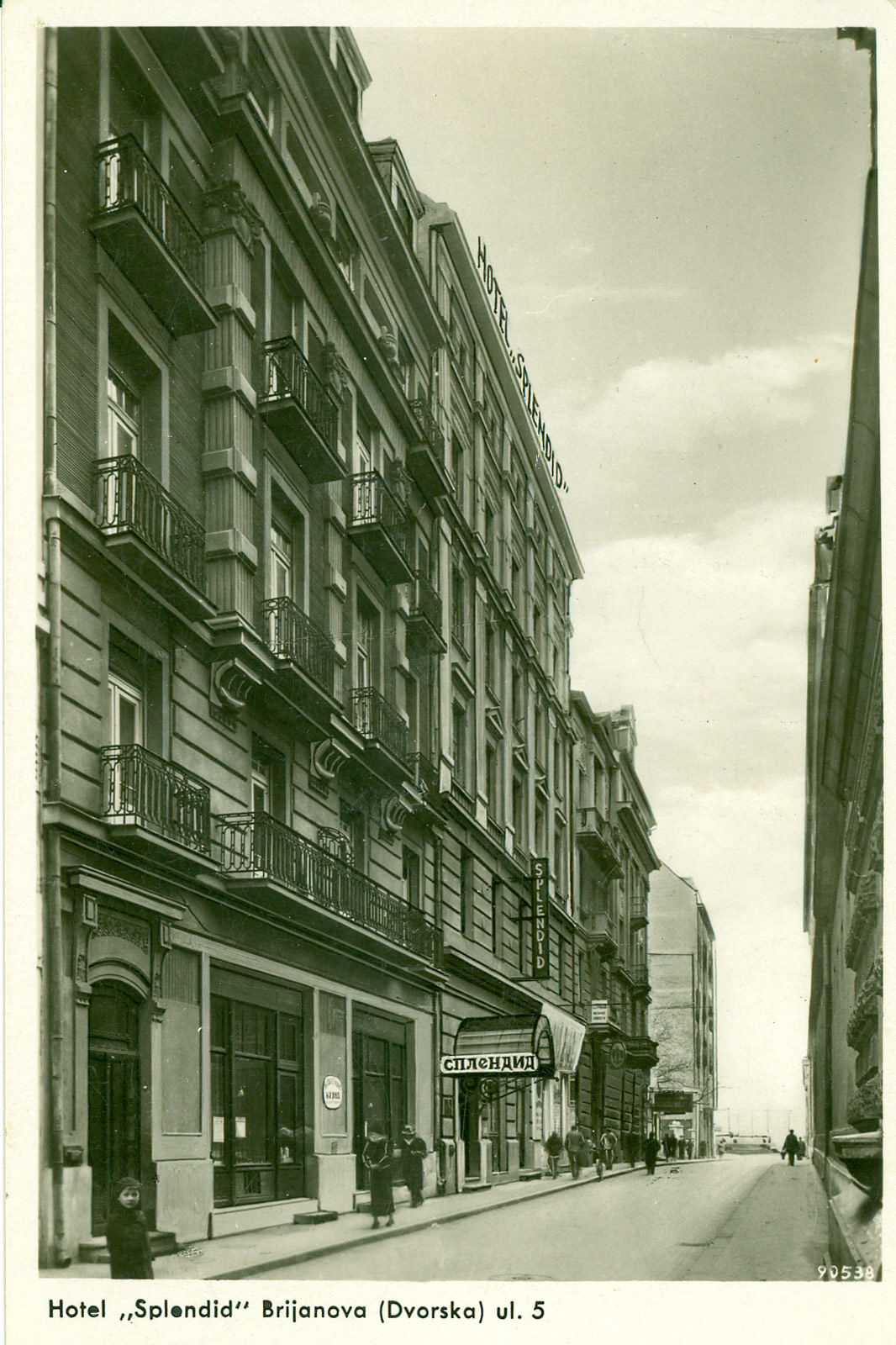 The partners were interconnected by deep respect and trust, which they crowned with godfatherhood. These hardworking, frugal and modest men lived in their family houses in Dorćol. They were never at variance with each other, which is also confirmed by their joint will written in 1934, reading: “…all we have acquired has been acquired fair and square, through our indefatigable work, saving throughout the 31 years of our partner work. Not for a single second have we stopped talking to each other, working in absolute mutual trust, so it is our wish that this trust of ours and our affection for each other should be conveyed to our descendants.”
The hotel and their jointly-owned tailor’s shop had been operating excellently until the beginning of the Second World War. During the four-year occupation of Belgrade, the management of the Splendid Hotel fell into the hands of the Germans. Also, a large quantity of English cloths was seized, in which way both the tailor’s shop and the trade were also liquidated.

With the liberation, the owners retook the Hotel again. Given the fact that the inventory had not been renewed for several years then, they had to bring bedsheets, tablecloths, napkins, etc. from their own home inventories. Hoping that they would continue to manage the hotel, they sent a letter to the President of the National Assembly of the Federal People’s Republic of Yugoslavia at the beginning of 1948, proposing that people’s deputies could be accommodated at the Hotel. On 28th April 1948, however, there was nationalization in place, so the Splendid hotel fell into the hands of the newly-formed state. It operated until several years ago. It is exactly these days that justice has been satisfied and the Splendid is once again in the hands of the descendants of these thorough men, loyal to one another.